They Said It Couldn't Be Done

Prominent Republicans and Democrats alike have criticized the idea of student loan debt relief at one time or another.
In July of 2021, House Speaker Nancy Pelosi said President Joe Biden does not have the executive authority to issue "debt forgiveness," arguing that such action would be illegal and that it has "to be an act of Congress."
"People think that the President of the United States has the power for debt forgiveness. He does not.  He can postpone. He can delay. But he does not have that power. That has to be an act of Congress," Pelosi said July 28 at a press conference.
National Review
"President Biden's student loan socialism is a slap in the face to every family who sacrificed to save for college, every graduate who paid their debt, and every American who chose a certain career path or volunteered to serve in our Armed Forces in order to avoid taking on debt,
This policy is astonishingly unfair," said Mitch McConnell.

So What's The Big Deal?

Why is there such a backlash against such a (previously) very popular policy? Biden did, in fact, run for president on the promise of such debt relief. The elephant in the room is... inflation!

The US and the rest of the world have been dealing with the worst inflation in something like 40 years, and a lot of people see this move as being inflationary.

Leading economists like Paul Krugman weighed in on the inflationary impact of this move.

"The argument 'but it will be inflationary' seems so obviously wrong, so inconsistent with the math, that, as I said, it's baffling," Krugman wrote. "Maybe people who oppose this move on other grounds are just going for the cheap shot?"

Who's Getting The Debt Relief?

"Using the authority Congress granted the Department of Education, we will forgive $10,000 in outstanding federal student loans. In addition, students who come from low income families, which allowed them to qualify to receive a Pell Grant, will have their debt reduced to $20,000.

Both of these targeted actions are for families who need it the most, working and middle class people hit especially hard during the pandemic making under $125,000 a year. You make more than that, you don't qualify.

No high income individual or high income household on top of the 5% in the top 5% of incomes, by the way, will benefit from this action, period. In fact, about 90% of the eligible beneficiaries make under $75,000 a family."

In recent months demand has been falling off a cliff. The real worry going into 2023 will be deflation not inflation. This debt relief package will help to mitigate the coming deflation. 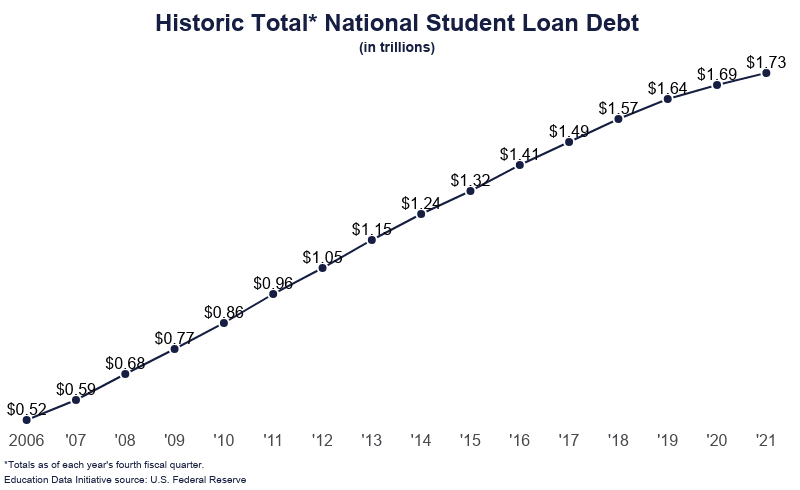 The debt relief package is a small portion of the total student loan debt so the inflationary impact will be small.
And the people who receive it are more likely to spend it so it will be more stimulating for the economy as it begins to slow next year.

This article was written by: Anonymous