I think we can declare victory on this one.
There was a bit of a rally after a gap down on Friday. See the chart below. 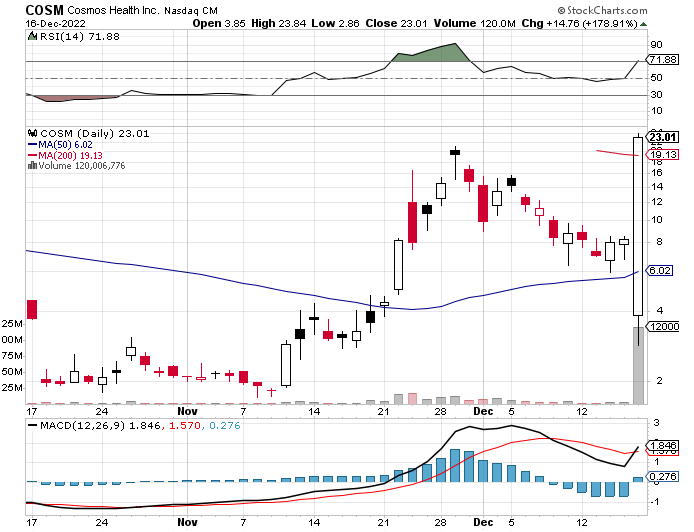 As I had written before, the most compelling evidence was in the unusual short sales activity tool, which showed high amounts of short selling on the following dates (shown with arrows) in the chart below. 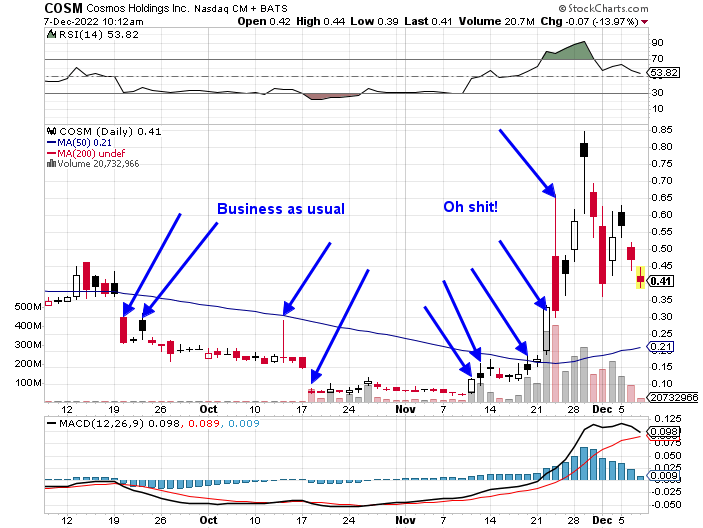 I'm referring to the "Oh shit!" portion where the shorts began losing control and even threw in some naked short selling to boot.
See below.

I do hope some people here at Shortable Stocks profited from this one!

Headquartered in Chicago with offices in Thessaloniki, Greece, Athens, Greece, and Harlow, UK, Cosmos has their own line of branded and generic over-the-counter medications, pharmaceuticals, nutraceuticals, health care and baby products, medical devices, and other products.
Their brands are "Sky Premium Life" and "Mediterranation" for their nutraceuticals division.
Here are some of the products they offer from those two brands: 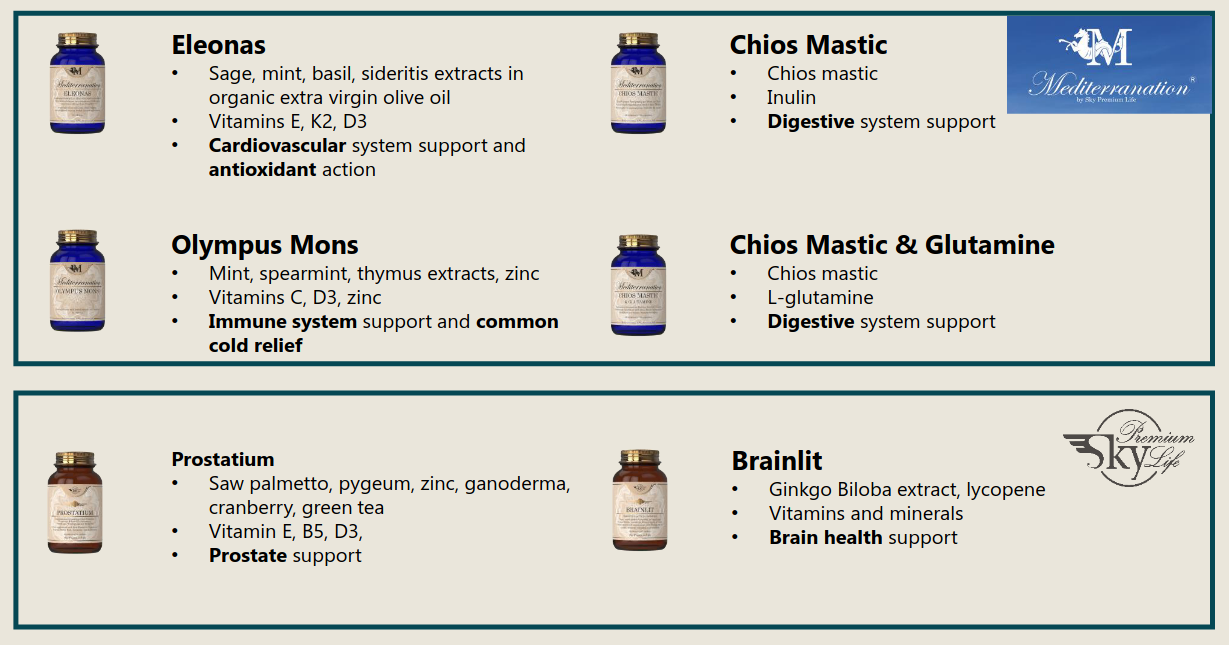 I might have to get some of that "Brainlit" stuff.
COSM has been around since 2009, but they recently uplisted to NASDAQ in the first quarter of 2022. They opened at $3.50 on February 28, 2022, and it's been a downhill affair ever since... until recently. This is where it gets interesting.
They are not a profitable company and haven't been for the past several years. This had made them a primary target for shorts, especially during the bear market of this last year. As a result, they have had a punitively high fee rate for borrowing stock to short, which has hovered in the 100-200% range for most of this year. It's difficult to profit on short positions with such high costs so this adds to the manipulation.
Here's a 6-month chart of the available borrow and fee rate with the stock chart overlaid. Notice how there was not much available borrow the whole time until the stock bottomed in late October. The shorts really made out like bandits, I guess. Once you factor in the ridiculously high cost to borrow (fee rate and rebate rate), then maybe it wasn't so profitable. Anyway, where it starts to get interesting is as the stock starts coming off its lows in early November. The shorts were out for blood as the available borrow went from 1.8 million down to zero in a very short time. The fee rate spiked to over 300% as well.

What makes this so interesting to me is that it seems the shorts lost control at least momentarily, and this is where opportunity presents itself.
I like to use the Unusual Options Activity Tool in situations like this to dig a little deeper. COSM has appeared on this list multiple times since we started tracking this in early September, and it's mostly been business as usual for the shorts.
Except when it wasn't. Clearly they lost control in mid-November as the stock went on a bit of a short squeeze on its way to a cool 10-bagger in just two weeks or so.

Since the high at $0.85 on November 29th, the volume has died down, the fee and rebate rates have come back down (somewhat), and the stock price has settled back a bit. But, lo and behold, that chart looks to me like a classic high-tight flag pattern, which is one of the most bullish patterns out there.
Yes, you could argue that the flag portion has corrected too much at 50% or so, but this is actually pretty common for these types of penny stocks. They're much more volatile than their larger-cap brethren.

This one looks very interesting to me and I'll be keeping a close eye on it in the weeks and months ahead. This one could have some big moves in its future.
I have no position in this stock.