The bottom line for this story was always about global dollar scarcity. This is starting to show itself in many ways, including the Swiss National Bank drawing on its currency swap line with the Federal Reserve again.
In related news, the US government is touting the reduction in its budget deficit. Hello? This is NOT a good thing in this context and is a large part of the reason why the stock market has been so weak. I suspect that if something breaks as a result of the Fed's interest rate hikes, it will happen overseas.

Let's start by looking at a long-term chart of the US dollar vs a basket of currencies. It's important to note the currencies that make up this basket: the euro, Japanese yen, British pound, Canadian dollar, Swedish krona and Swiss franc in that order. Here's a quick chart of that composition: 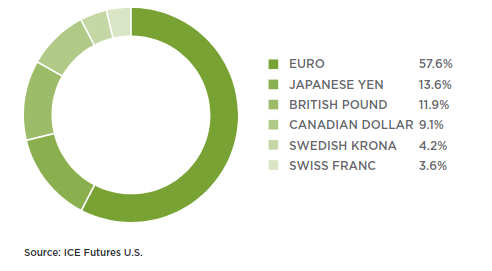 So, not terribly representative of global financial flows, but it's all we really have. Here's a chart of this basket: 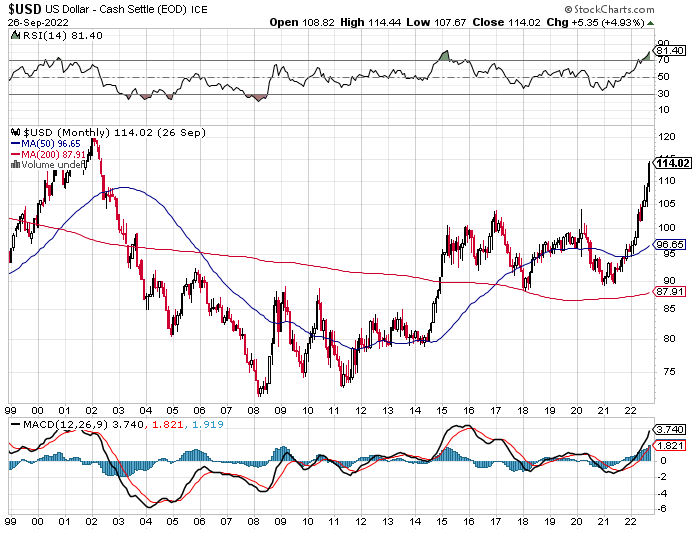 I'm using a monthly chart to eliminate the smaller fluctuations. The dollar is approaching levels not seen since the depths of the dot-com implosion and recession that lasted into 2002.

Everyone has heard about the dot-com bubble in stocks and its eventual collapse. For those of us who lived through it, it was certainly something to behold. There was so much excitement in the stock market during the bubble that you could literally buy anything and make money (sometimes within hours). Those are not normal times, of course. What you don't hear very much is discussion about the dollar's role in the collapse of the dot-com bubble. As the US economy was improving throughout the late 90s with the buildout of the internet, there was a mad scramble to get in on the action. Demand for dollars soared throughout the world. And for good reason. The US economy was booming. But something happened in the late 90s.

Most of the time, the US economy hums along and demand for dollars is satisfied by the Federal government's deficit spending. This is a much larger discussion that I won't get into much detail here, but since the US is a net importer and the private sector (everyone besides the Federal government) is a net saver the Federal government almost always runs a deficit. This is an accounting identity, the kind of thing where if the numbers don't add up you have to go back and find your mistake. The following is a brief discussion of sectoral balances, which you can read more about here.
(I - S) + (G - T) + (X - M) = 0
I-S represents the private sector, G-T represents the public sector, and X-M represents the foreign sector.
The private domestic sector (I – S) is positive if it's spending more than it is earning, and negative if it's spending less than it is earning overall.
The Federal budget deficit (G – T) is positive if the government is spending more than it's taxing, and negative if it's taxing more than it's spending.
The external balance (X – M) is positive if the nation is a net exporter, and negative if it's a net importer.
This will not get much wonkier, I promise, but it's important to understand the implications of the above. Since the US is a net importer (X-M is negative), and the private sector (I-S) is most of the time a net saver (I-S is usually negative), then that means that when you put those negative numbers on the right side of the equation the public sector (G-T) is almost always positive (running a deficit). It has to be that way most of the time for the US since the average person, business, state and local government (ie everyone but the Federal government) can literally run out of dollars to spend. And they can only borrow so much before the banks cut them off. This is not the case for a monetarily sovereign government like the US. That's where the dollars come from after all.

"What does all that have to do with the 2000-2002 recession?", you ask. Well, I'm getting to that. Take a look again at the chart of the US dollar above and pay attention to the late 90s. Into 1998 the dollar was gaining strength as the US economy boomed (as I mentioned before). But then a curious thing started to happen. Look at the sectoral balances chart below, which shows the (I-S) in green, (X-M) in blue, and (G-T) in red. The private sector began running a deficit instead of net saving, and the government's deficit got smaller and smaller until it turned into a surplus (they were taking money out of the economy). The private sector's deficit is only sustainable for so long until they literally run out of money (both savings and the ability to borrow). What happened afterward was the recession of 2000-2002. And the government necessarily went back into deficit again as the automatic stabilizers kicked in to support spending during the downturn.

They say that history doesn't repeat; it rhymes. Circumstances today are similar in some ways to the late 90s. We do not have a Federal surplus (thank goodness), and the private sector is not nearly as indebted as it was then. The main issue now is the dollar strength. Notice, again from the monthly dollar chart above, how the dollar strengthened into 2002 as the bear market in equities raged on. I think we will continue to see weakness in the stock market as long as the dollar remains strong. It will certainly benefit some, but will continue to be devastating to others, namely anyone with dollar denominated debt.

The good news, however, is that since the main reason for dollar strength (the Fed's interest rate hikes) will be coming to an end soon as it becomes more and more clear that inflation is coming down: see this article.

The Fed doesn't seem too interested in slowing down the pace of its interest rate increases, and it may take a crisis to get them to rethink their position.