Coal coal coal. Peabody is in the business of coal. Yeah, that disgusting, filthy, dirty stuff we all hate to admit we need. I liked how a few years ago the catchphrase was "clean coal." There certainly are different levels of "cleanliness" for coal, but it is anything but clean in an absolute sense.

So, Peabody filed for bankruptcy when coal prices slumped and they couldn't handle their high debt load. Arch Resources did the same. The chart below is from 2017 when Peabody came back to the NYSE. Yes, they got as low as $0.80/share before rebounding. 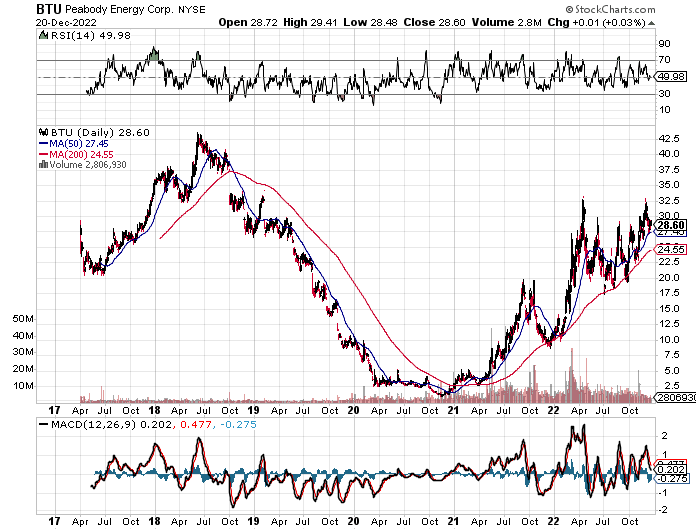 Here's the same chart with the price of West Texas Intermediate Crude (WTIC) overlaid in blue. 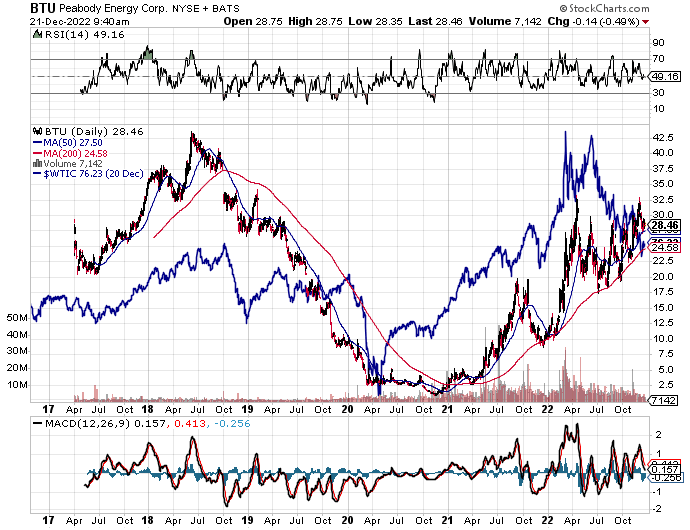 That's a pretty strong correlation as you would expect. They seem to move together. Now, the energy complex suffered like just about everyone else during the depths of the pandemic. That low for oil was right there in April of 2020, and as demand for oil started coming back again it started moving back up to the pre-pandemic levels pretty quickly. It took a little longer for BTU, but it too began to recover late in 2021. Things probably would have stabilized for the energy complex at or around the highs of 2018 had it not been for the Russia-Ukraine war. That upset everything energy. Early in 2022, as the the Russian buildup along the Ukraine border continued apace, and the warnings from US intelligence got louder and louder, energy prices really started to take off.

Energy prices feed into everything. From food production and distribution to transportation, heat and electricity production, petrochemicals, etc. etc. etc., crude oil is essential for modern civilization. And when crude prices get high, people shift where they can to other sources like coal, which is a big part of why their prices move in tandem. Anyway, the inflation we've seen over the last couple of years is finally slowing. It has taken a lot of time for supply chain bottlenecks to clear as the pandemic has run its course. It is taking even longer for places like Europe to reconfigure energy supplies away from Russia, but that is surely happening.

Getting back to the original purpose of this article, I think BTU is setting up for a nice short trade. And I'm not the only one who is getting out of this one.
Elliott Investment Management just filed a Form 4 with the SEC that they sold a huge chunk of stock in Peabody. Elliott had been a large holder of Peabody's debt when they filed for bankruptcy in 2016, and as part of the restructuring Elliott got a ton of preferred and common stock.
They also reported selling a similar amount earlier in December.
Granted, they still own a LOT of stock, but clearly they're lightening their positions up here around these levels. And I think it's because, like so many other people, they're seeing the writing on the wall.

Supply and demand for energy as a whole are coming back into balance. The futures market for coal is now in backwardation, which indicates that future prices are lower than spot prices. Here's the chart:

The current expectation is that market conditions in Europe will remain tight for some time as the energy crisis slowly works itself out. Futures prices have come down since that update from the IEA in July of 2022.

Inflation is coming down fast, and the energy situation in Europe is slowly being resolved as they work to bring longer-term energy supplies from elsewhere. Relatively high interest rates hurt the profitability of an indebted company like Peabody as well.
Their largest shareholder has been selling. Maybe this is as good as it gets for Peabody for a while?
I have no position in this stock at the moment. Obviously, I'm thinking about shorting the snot out of them at some point. ;)