In February, 2010, in response to the Great Financial Crisis, the SEC adopted a new short sale price test restriction.
This new rule, commonly referred to as the "alternative uptick rule," is designed to restrict short selling from further driving down the price of a stock that has dropped more than 10 percent compared to its closing price on the previous day.
Contrary to popular belief this does not prevent short selling in a stock. Its purpose is simply to make short selling more difficult as it means that a short trade can only be made on an uptick-- a trade higher than its previous trade. There is no equivalent for long volatility.
So, in practice, this would prevent shorts from piling on a stock experiencing weakness once the short sale restriction is in place.
The text from the rule is as follows:
"Short Sale Price Test Circuit Breaker. Rule 201 generally requires trading centers to establish, maintain, and enforce written policies and procedures that are reasonably designed to prevent the execution or display of a short sale at an impermissible price when a stock has triggered a circuit breaker by experiencing a price decline of at least 10 percent in one day. Once the circuit breaker in Rule 201 has been triggered, the price test restriction will apply to short sale orders in that security for the remainder of the day and the following day, unless an exception applies."
https://www.sec.gov/investor/pubs/regsho.htm

Atlis Motor Vehicles Inc. (AMV) went public on 2022-09-27 at $27.50. Trading was halted for volatility 5 times as it soared on its first day of trading. It closed at its high, $82.12, on that first day for a 298% gain. As if that wasn't enough the next day is when the proverbial shit hit the fan.
It opened at $243.99 on September 28th (a gain of 297% from the day before). Remember that the short sale restriction is based on the previous day's close so $82.12 is our reference point here. The stock never traded above its opening price on the 28th. I guess traders felt that an 887% gain at the beginning of its second day trading was enough. Now that candle on the 28th looks very impressive, and it is, but it's a little misleading. Only a few thousand shares were traded at those crazy prices. 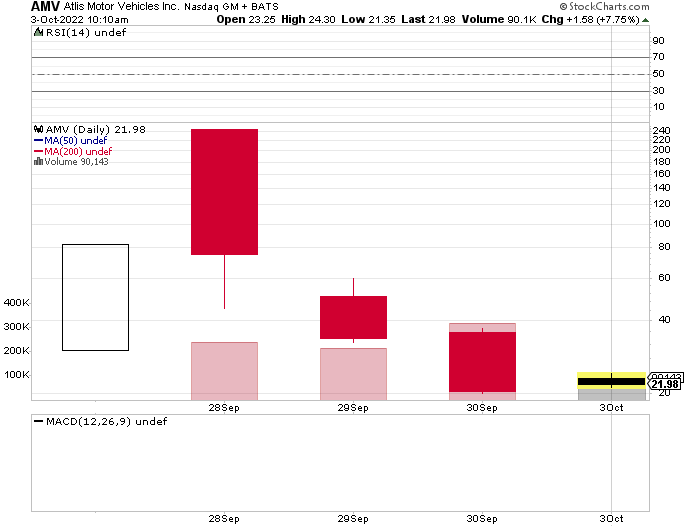 Here's a 5-minute chart that shows the trading on the 28th. Fewer than 3000 shares were traded above $100/share in the first few minutes. The short sale restriction did not go into effect until the stock traded down 10% for the day or to a price of $73.91, which happened within the 5-minute candle pointed to in the chart below. Notice the immediate effect this restriction had on the stock. Traders need to keep in mind that a short sale restriction does not prevent short sales. It just makes them more difficult. The restriction for AMV went into effect around 11am on the 28th.

But that didn't stop the short sales. Here's an image that shows the actual short sales from the 28th after the short sale restriction went into effect. Any short sale marked with an "M" is done by a market maker and is exempt from the rule. Again, from the text of the rule:
"Broker-dealers engaged in bona fide market making activities are excepted from having to borrow or arrange to borrow shares due to their potential need to facilitate customer orders in fast-moving markets without possible delays associated with complying with Regulation SHO. For instance, as explained above, they may be required by their market making obligations to sell short in situations where it may be difficult to quickly locate and borrow securities. Generally, to be eligible for the bona fide market making exception to the locate requirement, a broker dealer must hold itself out as being willing to buy and sell the security by providing and being at risk for widely available two-sided quotations at or near the market on the trading venue where it effects transactions for which it asserts the exception."
But in this image below you can also see trades marked with an "S." These are regular short trades. The times of these trades clearly show that short sales were still being executed after the short sale restriction was put into place.

Any stock that is short sale restricted is prominently noted as such within the Shortable Stocks system. Just because a stock is on the short sale restricted list doesn't necessarily mean it can't go down more. In fact, there are a lot of traders that seek out stocks from this list in order to target them for more weakness. Use this information to help inform your trading decisions.
Hopefully this short article has helped to explain this sometimes confusing concept.