Yeah, dumb name. They started out in Hawaii so that's the origin of the name. Late last year I wrote an article about this little company. I have since added to my position as I think the future looks sweet (pun intended). Let me explain.
Obviously the solar industry is experiencing a HUGE boom at the moment due to a number of factors but mostly because of the Inflation Reduction Act. The US is getting serious about combating climate change, and given the fact that it's perfectly suited for both solar and wind power, it makes a lot of sense.
Pineapple is trying to take advantage of the fragmented solar installer industry. Their acquisition of SUNation back in November of last year is a pretty big step in that direction in terms of the impact on its revenue. The combined business will have 3x the revenue of Pineapple pre-acquisition.

From the PR that announced this acquisition, Kyle Udseth, the CEO of Pineapple Energy said  "We believe the acquisition will give us more scale, increase our revenue substantially, and move us toward achieving the important goal of reaching cash flow positive in 2023." It seems like every company makes big promises in their press releases so we'll see about the cash-flow-positive promise for this year. But I wouldn't doubt it given the experience SUNation has in the business having operated in "Long Island for 19 years, offering a range of solar energy solutions including residential, commercial, battery storage, and roofing, and currently services over 12,000 PV systems. Over the course of almost 8,000 projects since inception, SUNation has installed over 275,000 solar panels representing 92 MW of clean, carbon-free solar power."

One major caveat I must mention is a going concern statement from their 3rd quarter 10-Q. Pineapple has a short-term note that matures in August. From the 10-Q: "the Company entered into a $5.0 million Short-Term Note that is due on August 9, 2023. Based on the Company’s current financial position, which includes approximately $4.6 million of restricted cash, cash equivalents and investments that are restricted under the CVR agreement and cannot be used by the Company for its own working capital needs, the Company’s forecasted future cash flows for twelve months beyond the date of issuance of these financial statements indicate that the Company will not have sufficient cash to repay the Short-Term Note obligation, a factor which raises substantial doubt about the ability of the Company to continue as a going concern for a reasonable period of time."
The cash-flow-positive promise will be a good one to keep given this note. To be honest, I'm not terribly concerned as I think they should have no problem dealing with this. Just wanted to mention it before moving on.
With that important consideration out of the way I want to turn to the charts.

So the trading in this stock has been very interesting to me. It came to my attention back in early October of last year when it went up nearly 10x in something like two weeks. That's the area marked with arrows and labelled "WTF!!" in the chart below. I looked and looked for some news item that would explain that move seemingly out of nowhere but found nothing. Seriously, what the...? 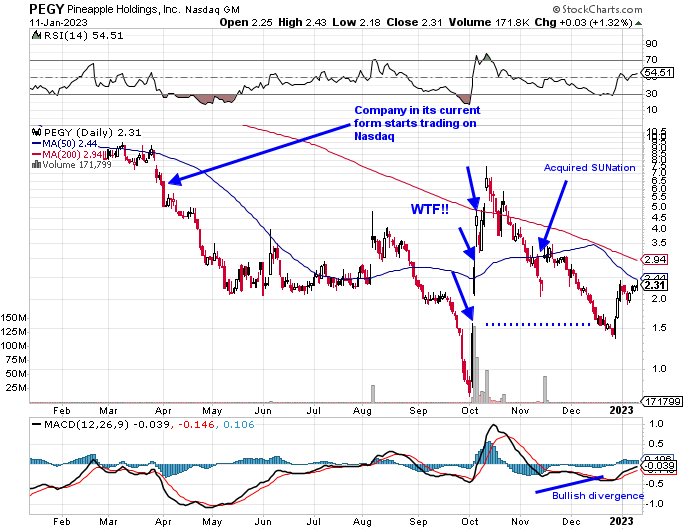 Someone was aggressively shorting the you know what out of this stock since it started trading as PEGY in late March of 2022. The third quarter had just ended before the short squeeze in early October so maybe someone had gotten wind of the going concern note and took advantage? Anyway, I'm wondering why it had the big move in early October, and the only thing I can guess is that someone found out about the pending acquisition of SUNation. Given the financial effect on the company, it was probably a wise move to get out of any short position and/or force a squeeze. Maybe I'm overthinking this?
The announcement of the acquisition was anti-climactic as there was hardly any volume that day. Volume didn't come until a couple of days later on a big gap up. Clearly the stock wasn't ready for a resumption of the up move that started in early October as it continued down over the next month to fill the gap at the dashed line on the chart above. With that gap fill it also showed bullish divergence on the MACD. 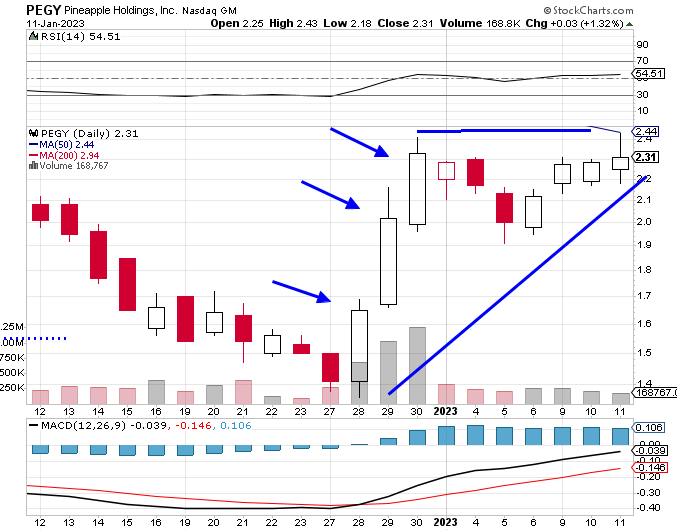 2022 ended with the three white soldiers candlestick pattern (not perfect so don't shoot me) marked with the arrows above on strong relative volume, and the stock has since settled down into an ascending triangle pattern. These are bullish signs, and it appears to me that short term the stock looks like it will target that 3.50 area, which just happens to be the top of that high volume day in mid November. The funny thing is that as you zoom back out again this is starting to look like a (slightly funky looking) bigger inverse head and shoulders pattern. A move back to that 7.50 area would imply a later move to 13.50. And that just so happens to be the exercise price for the PIPE warrants in the PIPE deal below.
"Following market close on November 9, 2022, the Company also entered into a separate Consent, Waiver and Amendment with each of the Company’s existing PIPE Investors whereby these investors provided certain waivers to the anti-dilution protections that reset the conversion price of the Convertible Preferred Stock to $4.00 and reset the strike price on certain of the PIPE Warrants to $4.00 from $13.60. Following the adjustments, the Company’s $32 million of Convertible Preferred Stock preference is currently convertible into approximately 8.0 million shares of common stock at $4.00 per share and the PIPE Investors hold PIPE Warrants to purchase approximately 4.0 million shares of common stock at $4.00 per share and PIPE Warrants to purchase approximately 1.2 million shares of common stock at $13.60 per share. The conversion price of the Convertible Preferred Stock and the conversion price of the PIPE Warrants and the number of shares issuable upon exercise of the PIPE Warrants continue to be subject to further adjustment in accordance with their terms."
It sure looks to me like there'll be more acquisitions coming. But, of course, they've been saying that all along. From the PR dated 3/30/2022:
"The company intends to actively pursue additional acquisitions in addition to driving organic growth. Pineapple is actively building a pipeline of potential acquisition partners. The Company believes there are dozens of regional residential rooftop solar installers across the U.S. that could benefit from the synergy of being part of a larger organization with national brand recognition, volume purchasing power, and the support of sophisticated marketing, operations, and administrative systems. Pineapple also expects to explore possible business combinations with leading energy technology solution providers which would expand Pineapple’s energy management solutions capabilities. Through a steady flow of acquisitions, Pineapple believes it can grow into one of the nation’s leading residential solar and energy storage suppliers."

Sunrun (RUN) is one of the largest solar installers and is a great comparison for valuation. Their price/sales ratio is about 2 and has been as high as 4 over the last couple of years. The industry average for solar installers is about 1.5. The expected revenue for the combined Pineapple Energy/SUNation company is about $70 million. They currently have about 7.5 million shares out, and in their latest 10-Q they don't include the dilutive effects of the outstanding warrants because the share price was too low, but I will assume roughly 20 million shares out for my calculations to take this into account.
So, $70 million in sales times 1.5 price/sales divided by 20 million shares yields $5.25/share, and $10.50/share at the upper end of the price/sales range. And that's before any more acquisitions, which we know are coming.

Do your own due diligence. I have and I own a LOT of PEGY.