This morning AERC surged following news that it had received FDA 510(K) clearance on 11/30/2022 for its Purgo UV air purifier. This stock was a high flier during the dark days of the pandemic. It IPOed at $10 and traded as high as $117.35 before falling back to Earth.
Understandably so, as it has been pre-revenue for the most part since going public.

That is all about to change, however, as Aeroclean is about to merge with Molekule in the first half of 2023. The combined entity will be called Molekule and its ticker symbol will be MKUL.

"The combined company is expected to generate approximately $45 million of revenues in FY 2022 on a pro forma combined basis and is expected to have a solid balance sheet with a strong liquidity profile upon consummation of the merger."

I have drawn arrows for these three news events on the chart below. I think we're about to see an initial move back to the 200-day SMA (5.09 as I write this) over the near term, but, more importantly, as the market anticipates the consummation of the merger with Molekule I expect the stock to return to the 20 area. 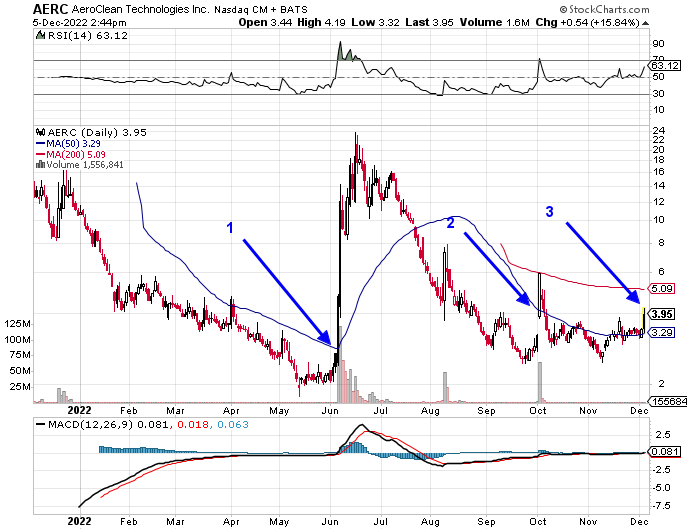 I continue to hold this stock as I think the best is yet to come.

Both AVCT and AERC have been showing up on many of the lists here at Shortable Stocks including the trending tickers list on the front page as well as the unusual short sales transactions activity list.

We will discuss both stocks briefly and show a few charts.

American Virtual Cloud Technologies, Inc. is a NASDAQ-listed company based in Atlanta, GA. They provide cloud-based enterprise services worldwide.
Most recently it has been listed repeatedly in the unusual short sales transactions activity list. It is unusual for a stock to appear multiple times in this list over such a short period of time. Not only did it appear there, it did so with a high ratio of its short sales for those days marked as market maker short sales. In other words, market makers had to step in to provide shares for people to buy as there was an unusually large demand for the shares.
It appeared there on the days marked with arrows. 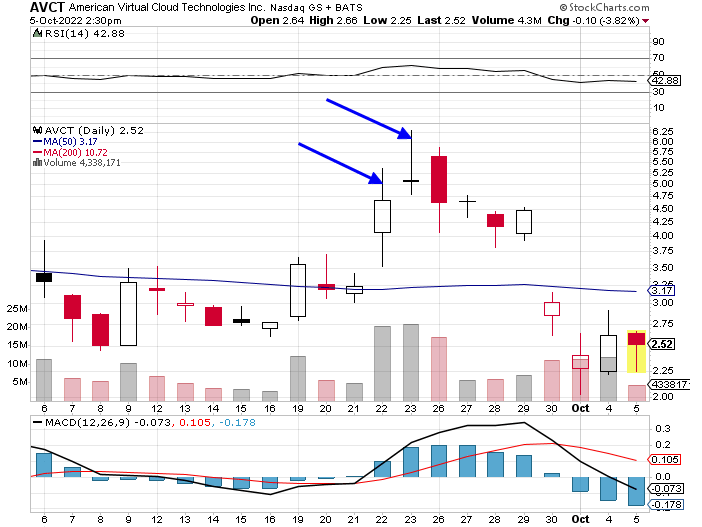 Now this information can be used in many ways. You could have immediately sold the stock short on both of those days and your position now would be nicely profitable or you could have waited for a retest of the recent lows before initiating a long position. This has just occurred in the last few days and prompted me to take a small speculative long position in the stock.

AeroClean Technologies, Inc. provides air purification solutions for hospitals and other healthcare facilities.
It has also been on many of the lists here on the site, and is, in fact, the top trending ticker as I write this.
It also appeared on the unusual short sales transaction activity list, but this time it was for 10/3 and 10/4. The strength in the stock yesterday is what piqued my interest-- a follow through day of sorts.
I have also, just today, taken a small speculative long position in AERC. 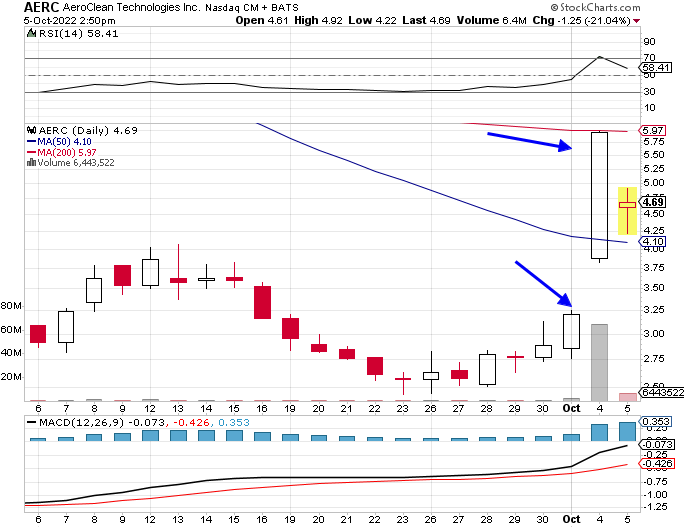 OK, well, maybe not necessarily, but the past can provide important clues about the future. Other stocks that have exhibited similar behavior recently have been stocks like HKD and FNGR.
HKD appeared on the list initially, settled down for a day or two, and then really took off.
And FNGR just took off after appearing on the list. It's been on the list nearly every day since first appearing there on 9/27. 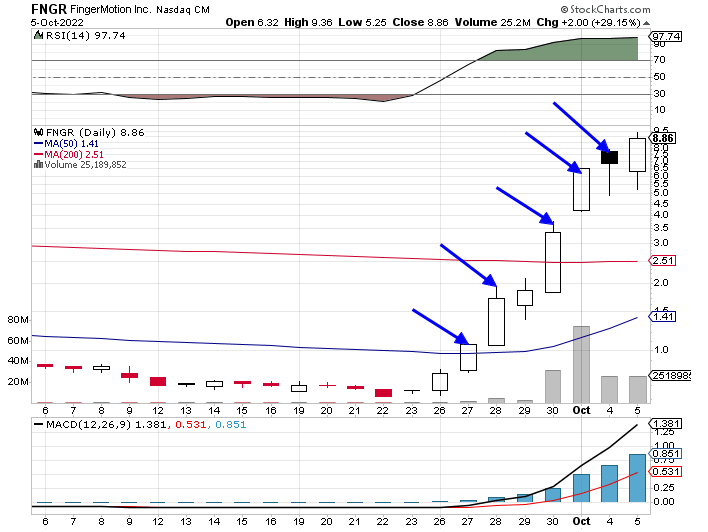 Now it's impossible to say what will happen to any stock in the future with certainty, but there are clues we can look for to make an educated guess.
Couple this information with the borrow and fee rates and you've got a winning combination. That's what it looks like to me and I've put my money where my mouth is.
Our Trading System