At Shortable Stocks we maintain a list of stocks that are ripe for a short squeeze. That is, they have a large short interest and it is currently difficult for them to sustain it.
True short squeezes are pretty rare. You don't see a move like Gamestop (GME) had in 2021 or AMTD Digital (HKD) had this year very often.
It takes quite a confluence of events for a true short squeeze to happen.

Much more common is what we like to call a mini short squeeze. These are events that, while not as painful for shorts, are quite profitable for people betting against them. And if you're able to have a series of these mini squeezes, it can end up having a similar effect on your portfolio.

Hedge funds and large firms have a dedicated staff of programmers at their disposal to make sense of the huge (and I mean huge) volumes of data that Wall St. generates every day. It is literally like finding a needle in a haystack to identify a move that is about to happen. Heck, it's difficult enough to report on what HAS happened in any meaningful way. Using this vast amount of information to accurately predict future moves with any reliability is, shall we say, hard.

All of these stocks in the table above have the large short interest and high fee/rebate rates, but they are not necessarily ready for an imminent short squeeze.
That will require some kind of catalyst. No one is in this market looking to lose money, and hedge funds and trading firms have an information advantage over the rest of us.

OK, yes, they probably do, but we can give them a run for their money. The most important thing in trading as in a lot of things in life is to watch what people do not what they say. So in that spirit we have put together a new tool that is designed to do exactly that: find stocks that may be nearing an exhaustive level of short selling. You want to look for stocks that are either going up or refusing to go down very much in the face of very high short selling. That is one catalyst that we can readily identify. Most of the stocks in the table above have had an unusual amount of short selling in the past month. We will discuss one of these here.

BigBear.ai Holdings provides artificial intelligence and machine learning for help in decision making.
The days to cover ratio looks pretty manageable for now, but remember that these data are presented with a significant lag. 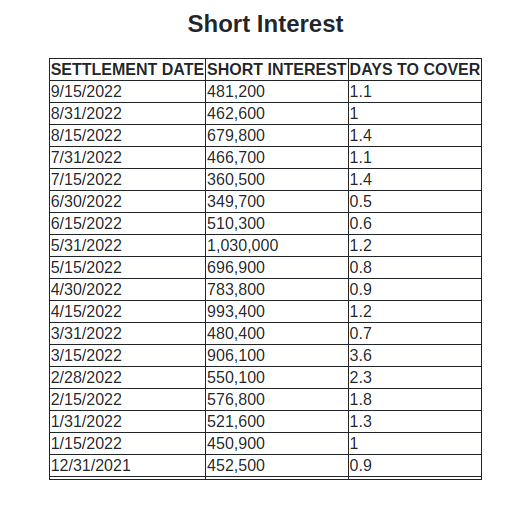 After 9/15 there was quite a large volume day (9/29), which also had a very low ratio of market maker shorting-- only about 4% of the dollar volume. 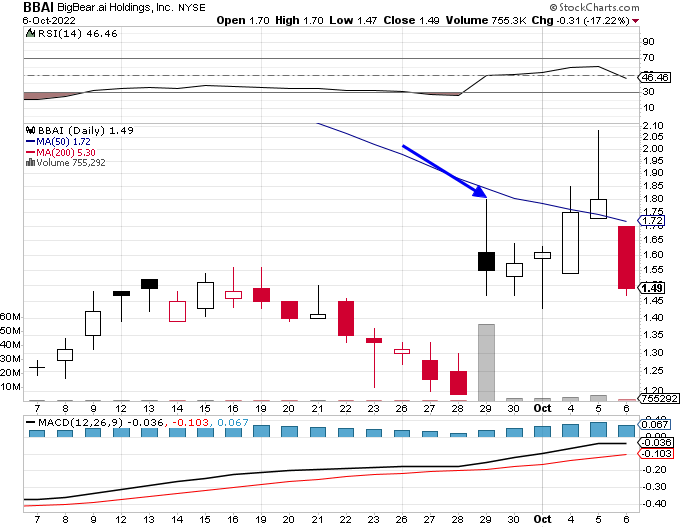 The arrow points to that day. The low ratio of market maker shorting means that it was mostly bona fide shorts-- trying to keep the price from running away from them. The stock went on something like a 30% move from there in just a few days, but I suspect there may be something bigger coming. It has now retraced almost that entire move. The shorts have kept the price under control for six days now, but will it continue? A mini short squeeze may still be in the cards, and who knows, maybe even something bigger. But with a punishing fee rate of over 267% as I write this (!!) and a negative rebate rate almost as big, there's only so long before something gives.

I will be watching the unusual short sales transactions tool as always.