The bear market has not been kind to Tesla. It's down almost 70% for the year! Sometimes opportunity arises with tragedy so let's take a look at a few things.
A friend asked what I thought about the stock and, of course, I immediately thought about everything that's happened this year with Elon Musk. 2022 has been disproportionately unkind to that man. I think a lot of his troubles are self-inflicted so... you know, whatever.
Of course I've been paying attention to Tesla's stock-- mostly watching it go down down down. I zoomed out to a 10-year chart, and lo and behold this very long-term rising wedge appeared. Yes, this is an exponential chart and the look is totally different on an arithmetic chart, but bear with me.
Rising wedge patterns are very unstable, and when they break the retracement is usually very deep. In fact, the target is the base that defines the first two points. That puts a target in the high 20s for the ultimate low of this move.
Now I don't know about you, but that seems totally unrealistic to me. But when you consider that Musk used Tesla stock to buy Twitter, it put a lot of pressure on the stock, especially with all of this happening during a difficult bear market.
Here's that chart: 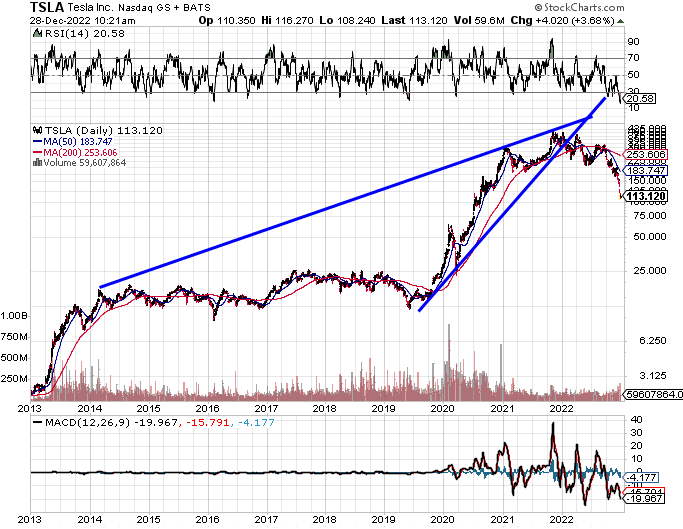 During the long stretch from 2014 to 2019 where the stock moved mostly sideways many people complained about how overvalued it was. I think they were mostly right. Yes, electric cars are a paradigm shift, and this shift will continue, but it is impossible with current technology for everyone to own an electric car. I have written about this previously. But holy cow what a short squeeze from 2019 to the end of 2021! The naysayers got crushed as the stock went on an epic run.

Then Musk opened his mouth.

He really should have just kept his mouth shut. The prevailing wisdom was that he was libertarian and a little strange, but that his heart was with the liberals. After all, they were the ones mostly buying his cars. This whole thing really kind of reminds me of Donald Trump in a way. I think Trump could have gone the rest of his life without a lot of scrutiny for some of his questionable business practices, but by becoming president he pissed off a few too many people. Now they're after him. The insurrection certainly didn't help. But back to Musk. His words and actions surrounding Twitter have exposed him as being just about the opposite of his carefully crafted image. And a lot of Tesla's customers now regret their purchases. This tarnishing of the brand's image will take a long time to recover, in my opinion.

Back to the charts

As I zoomed in on the chart I noticed something else. And as you know, charts almost always offer a little something for everyone since chart reading is subjective. 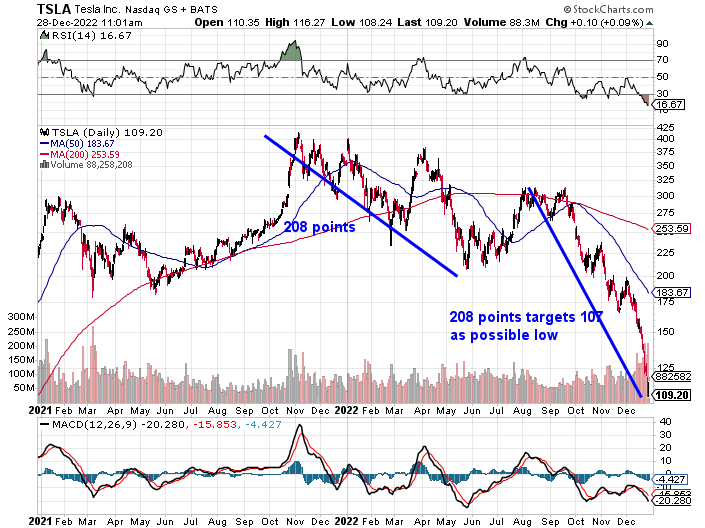 The all-time high was 414.50 (rounded to 415), and the first leg of this bear took it to 207 (again, rounded) for an almost perfect 50% correction. In Elliott wave we call this an A wave. It can represent the entire correction, in which case it would be relabeled, but here it certainly didn't. Tesla recovered somewhat with the rest of the market into August, but then the devastating next leg got underway as the bear market resumed. C waves are very often fast and furious and this move in Tesla since August has been no exception.

Take this with a huge grain of salt, but I'm seeing the possibility for an end to the carnage in here. The high in August was 315 (rounded) and a matching 208 point correction from there (where C equals A) targets 107 for a possible low. The low so far is 108.24 from just this morning and that could be close enough. I have no skin in the game, and I really don't care what happens to Tesla's stock, but if someone sees this, acts on it, and makes some money, hey, more power to you.
This year has been difficult (for longs) and there are an awful lot of people who have been selling for various reasons as the year closes out. Booking losses before the year ends can be a good way to offset other income, and I'm sure there are a lot of money managers who want to make sure they don't have Tesla on their books when the year-end report comes out.
In any case, it will be fun to watch since Musk and Tesla (and Twitter) have been such a train wreck.