ToughBuilt makes home improvement and construction products, and they're based in Lake Forest California.

ToughBuilt has been near the top of the short squeeze list for months, and they're currently at number 8. They went public back in December of 2018, and with the exception of one intraday spike about a month later, it's been downhill ever since.
When you look at their chart it looks like they went to stratospheric heights. 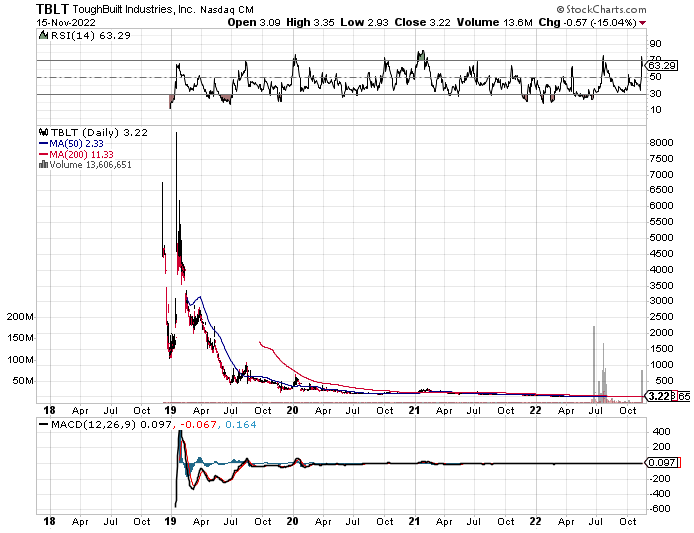 That initial spike was to $8325 on the chart above. But what you have to keep in mind is that TBLT has had two reverse splits. The first, in April of 2020, was a 1 for 10, and the second, in April of 2022, was a 1 for 150.
So split adjusted that $8325 high was really only $5.55. Companies that do this sort of thing are usually trying to avoid getting delisted from a major exchange, and in this regard TBLT is no different. "[O]n November 16, 2021, the Company received a 180 calendar day extension from Nasdaq’s Listing Qualification Department to meet Nasdaq’s continuing listing requirements by maintaining a minimum bid price per share of $1.00 for a minimum of 10 consecutive trading days. The Company now has until May 16, 2022 to meet Nasdaq’s minimum bid requirement."
See article here. The stock closed at about $0.52 that day after adjusting for the future 1 for 150 reverse split.

Pardon the offensive language, but this stock has been a real shit show to say the least. People who bought the IPO (assuming they're still holding their shares) are down 99.9524%. Great job, management!

There are so many stories like this. A lot of these companies eventually get delisted and end up trading on the pink sheets. Or they just fail completely. But there is actually a bit of a silver lining for TBLT here. For the past many years this company has reported nothing but losses. 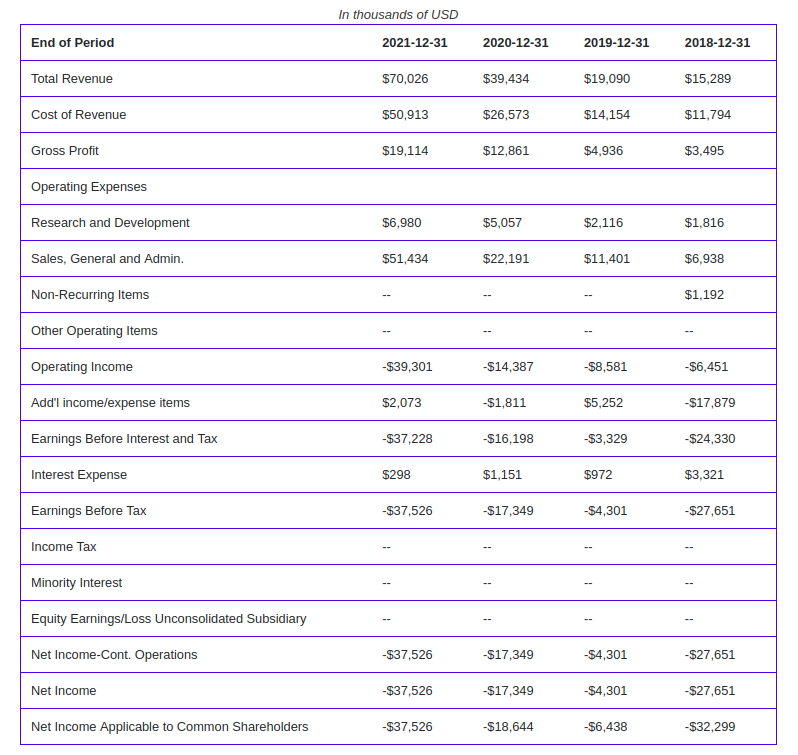 But then, lo and behold, they just reported third quarter 2022 results and from the press release:
Michael Panosian, ToughBuilt’s CEO, commented, "We are thrilled to announce strong results for the third quarter of 2022, with the entrance into to [sic]* three large global markets with the launch of our striking, cutting and measuring lines." Panosian continued, "We remain confident in our long-term strategy, building upon our partnerships and relevant opportunities to grow our market share in different categories. We expect revenues to continue to increase rapidly as our recently announced product introductions and distribution partnerships ramp-up. We remain focused on delivering profitable growth and are targeting profitability in 2023."
* It does drive me crazy to see stupid typos like these in public companies' press releases. So unprofessional.
I'm sure that surprised a lot of people.
That's the thing with these low float stocks that have been abused by short sellers. This one is deserved for the most part, by the way. You just never know when something comes out of the blue to really shake things up.
On this shorter term chart you can see that the press release two days ago caused a pretty massive spike in percentage terms. The stock was up 81% intraday on the news. Now just this morning the company announced that they're selling stock, which they obviously had all ready to go to take advantage of the price spike they assumed would happen with the earnings release. These guys are a piece of work! But anyway, there is a faint glimmer of hope for this company. 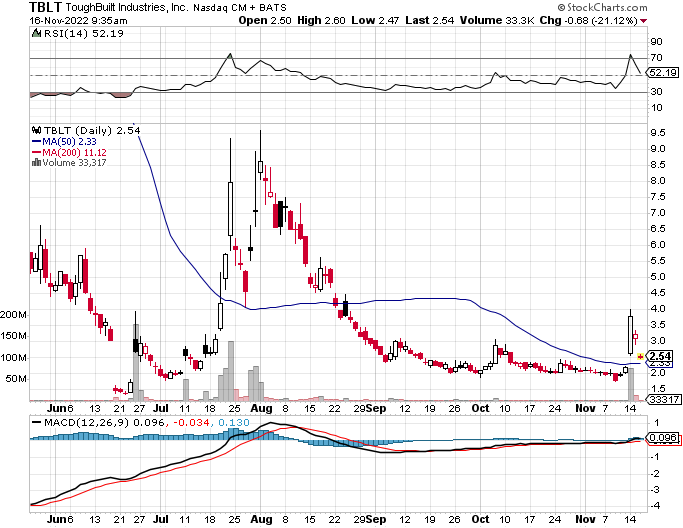 Please understand that stocks like this are extremely speculative, and this is not any kind of recommendation. But with very high borrow rates (and very negative rebate rates) this stock will have shorts trading in and out quickly. As recently as yesterday afternoon there were zero shares available to short and now it's back to 350,000 available this morning. That's a decent amount of activity for a stock with such a low float.

There are many much better stocks out there

That is my bottom line assessment here. I wouldn't touch this one because management seems to have such disregard for common shareholders. However, if you can (somehow) time this one right, you could really clean up at the shorts' expense. Good luck to anyone who tries!